Being a South Dakotan by choice, I recognize the beauty, generosity and character of the people who live here. In many ways, South Dakotans emulate the worker bees of a typical hive. Below recounts our adventurous first season of beekeeping and how easily you can manage a hive and collect honey yourself!

The Ecklunds knew I was needing a new project. Fortunately for us, they also were in need of a new location for one of their hives. Bringing over a family of Italian (Apis mellifera ligustica) bees, and a complete set of equipment, we quickly started on this adventure.

I’ll admit, without the Ecklunds, I likely would not have endevoured to start beekeeping. But there are SO many great resources to get you started: 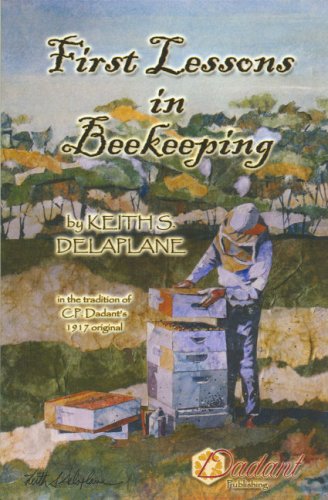 First Lessons in Beekeeping by Keith S Delaplane is a joy to read. The well-described summary on the back of this book states: “Honors the tradition of sticking to the basics, while fully engaging the new realities of beekeeping in the 21st century. Here is everything you need to know to become a successful beginning beekeeper”.

The Backyard Beekeeper by Kim Flottum is also a highly regarded resource. Flottum explains how to get started, find the ideal location for bee colonies and how to use the beeswax and honey once the season ends.

I love the Facebook page Sioux Falls Area Beekeepers Group. If you aren’t in the Sioux Falls area, one of the social media sites likely has a local group for you.  Also consider Bees on the Net.

2. Collect your equipment and bee colony 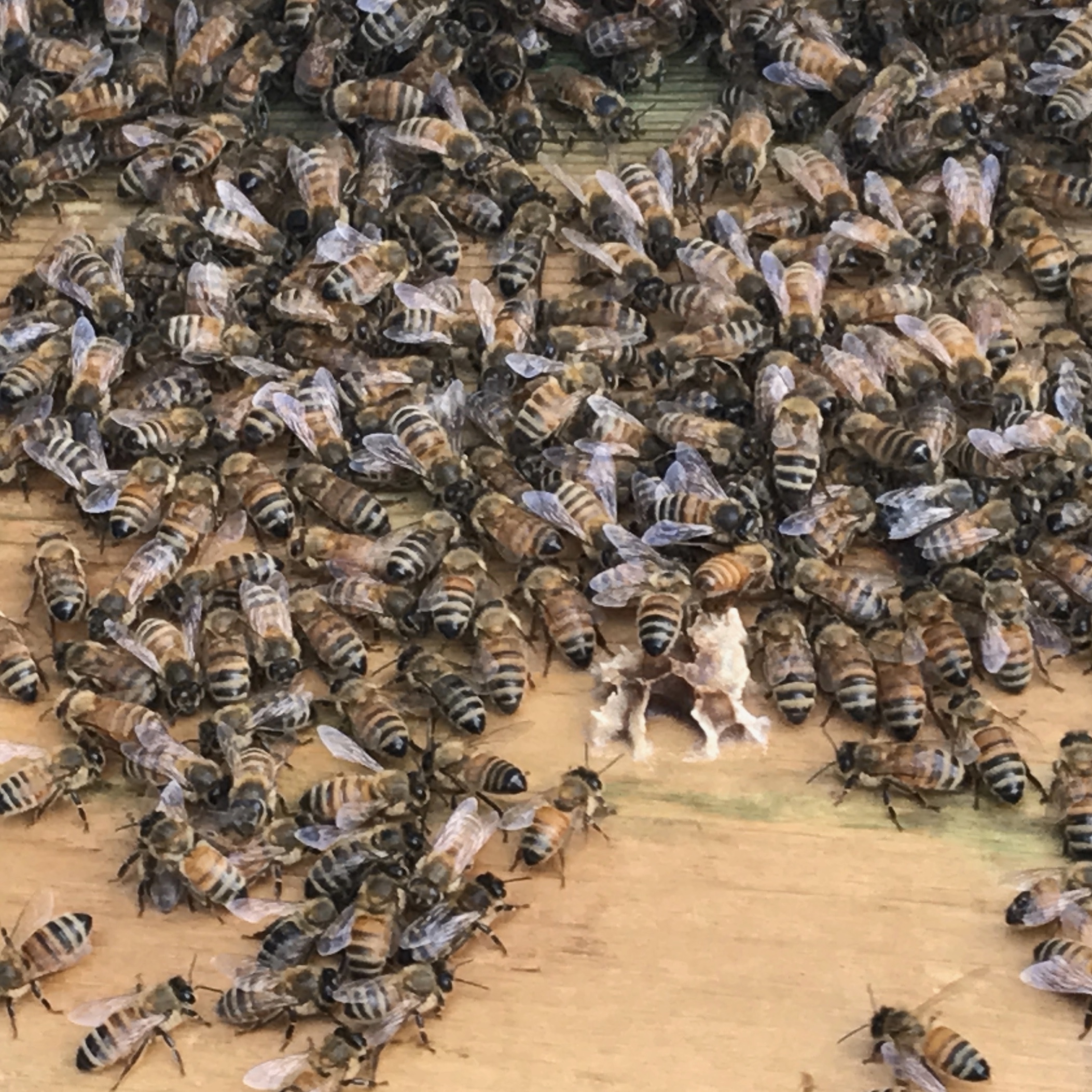 First off, I cannot take much credit for this first season of beekeeping nor honey production. Friends Ali and Scott Ecklund arrived at our house with the stocked hive and enough knowledge to confidently start the process. Of note, my husband Matt just returned home in his suit and tie but didn’t want to miss out on anything by changing! Ali outfitted us before moving the new hive from their truck to a sunny location. 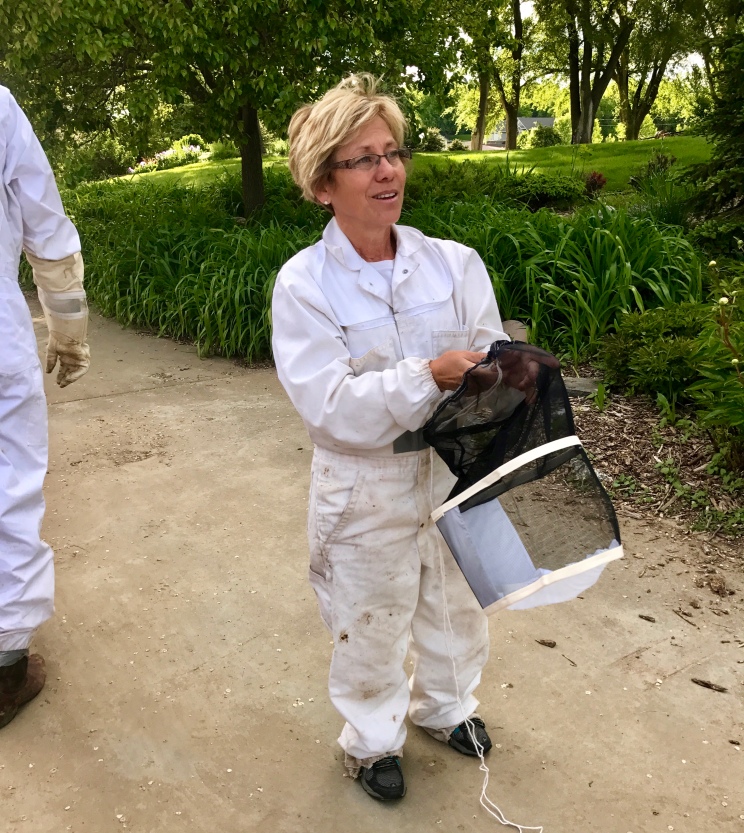 Ali and Scott unloaded the two brood boxes where bees reproduce and the queen resides. After placing the brood boxes on concrete blocks in a sunny location, we topped the hive with a “super”- meant for bees to manufacture honey. 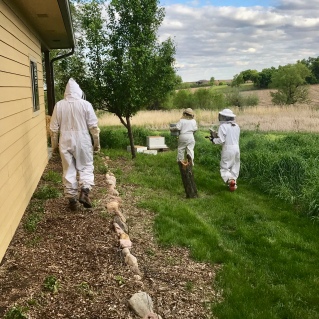 Starting with only a few thousand bees, the hive typically grows to 60-80k bees by the end of the summer. In order to keep these insects calm, a smoker is used to interfere the bee’s line of communication. Smoke interuppts their ability to smell their protective “alarm pheromone” and keeps bees calm. 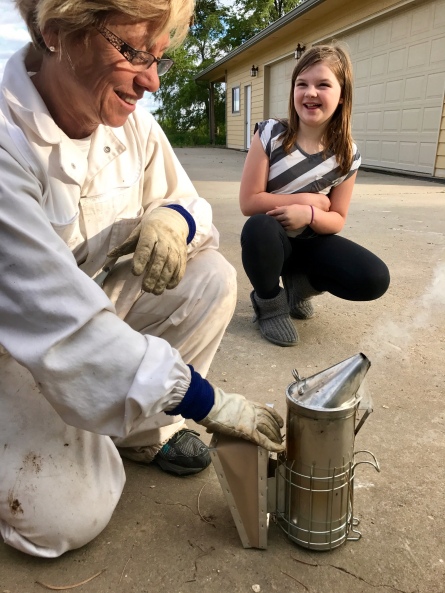 Below you see Ali, Scott, Matt and I assembling the brood boxes on cement blocks and topping this with a single super. Although the bees are relatively young and sparse, the boxes are surprisingly heavy!

Ali and Matt discuss where to place the hive

The remaining bees appear dead in the nuc box and stuck to s’thing on the crate.

We wanted the fullest sun possible for the hive, however, we learned a nearby building did cast a shadow on the site the first several hours of the morning. Unfortunately, once established, the boxes can only be moved a foot a day or else the bees will become less productive. We decided to keep the location where it was for this season.

3. Watch and Wait for Honey Production

Ali took a quick peek inside the supers (about 3 weeks after the hive was established) and took photos of one of the panels. No honey yet, but Ali reassured me: “We won’t see much action (in the super) until the second brood box is filled up” 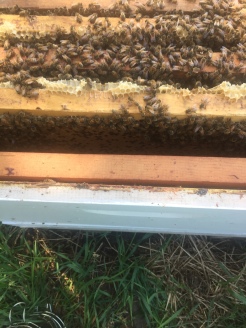 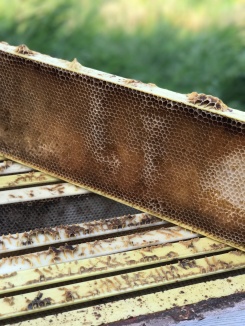 Ali came to the house to check on the brood.

As the bees expand their colony in the bottom brood boxes, we observed young white bee larvae at the center of the waxy homes. The queen bee is 1.5x the size of the other bees and is usually very easy to find when inspecting the brood box.

In the bottom two wooden boxes, bees propigate. Once the brood is strong, bees start storing honey in anticipation of winter. Ali frequently checked the supers through the summer. If bees fail to make honey, there is often a concern with the bees’ health in the bottom two boxes. The entrance has two possible “doors” – one for summer (wider) and winter (smaller) which keeps rodents out. Preditors like mice and raccoons will eat the honey. 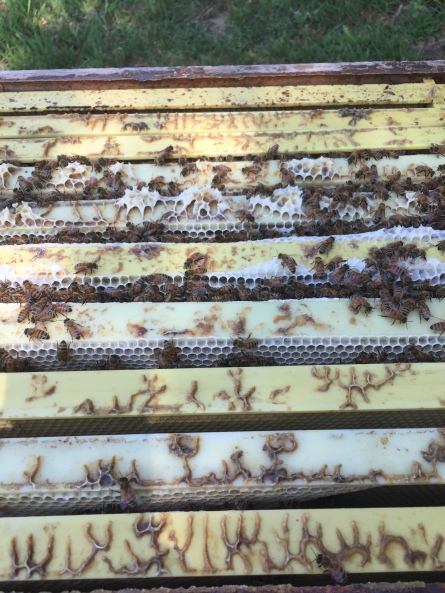 Ali opened the super to find frames that have been built out. In her words, “They are just beginning to cap the honey- when it is capped, it is done. Good to see Snow on the Mountain.” 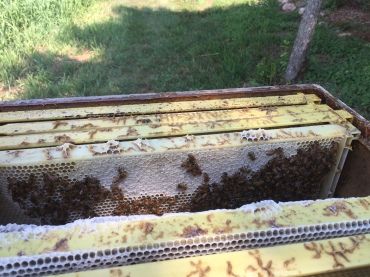 Snow on the Mountain revers to the capped honey

Snow on the Mountain revers to the capped honey

Late winter/early spring colonies begin expanding their populations and they consume the honey stored from the previous season. Unless the beekeeper intervenes, they may starve, therefore supplemental sugar is provided for hives to improve survival rates through the winter. During this time they are also susceptible to pests and diseases therefore Ali protected the hive with an anti-mite treatment.

Once the weather turned cold, Ali recommended we glean the honey off the existing supers. As the nectar begins to dwindle, bees will start to consume the honey they produced. It is best to harvest honey before the bees lessen the supply.

First, Ali removed the supers and left bottom brood boxes. Turning up the temperature of her shop to 90 degrees, we worked with an electric heated knife to remove the waxed caps to allow honey to be extracted. Both sides of the frames have wax caps, therefore, we removed wax from both sides of the frames. 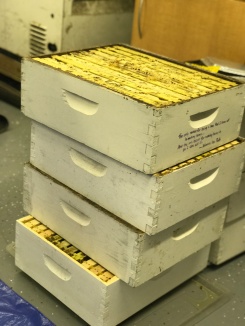 Next we loaded six frames at a time into the centrifuge.

Once the honey was extracted, we poured the harvest into 5 gallon buckets.

Some will bottle honey “as-is” however bits of bees, wax and other debris are worthy of filtering out. Using a filtering lid, extracted honey was poured through the mesh, removing unwanted particles.

And here it is!  The finished product of arduous work from the bees, friends and a couple of electric tools. 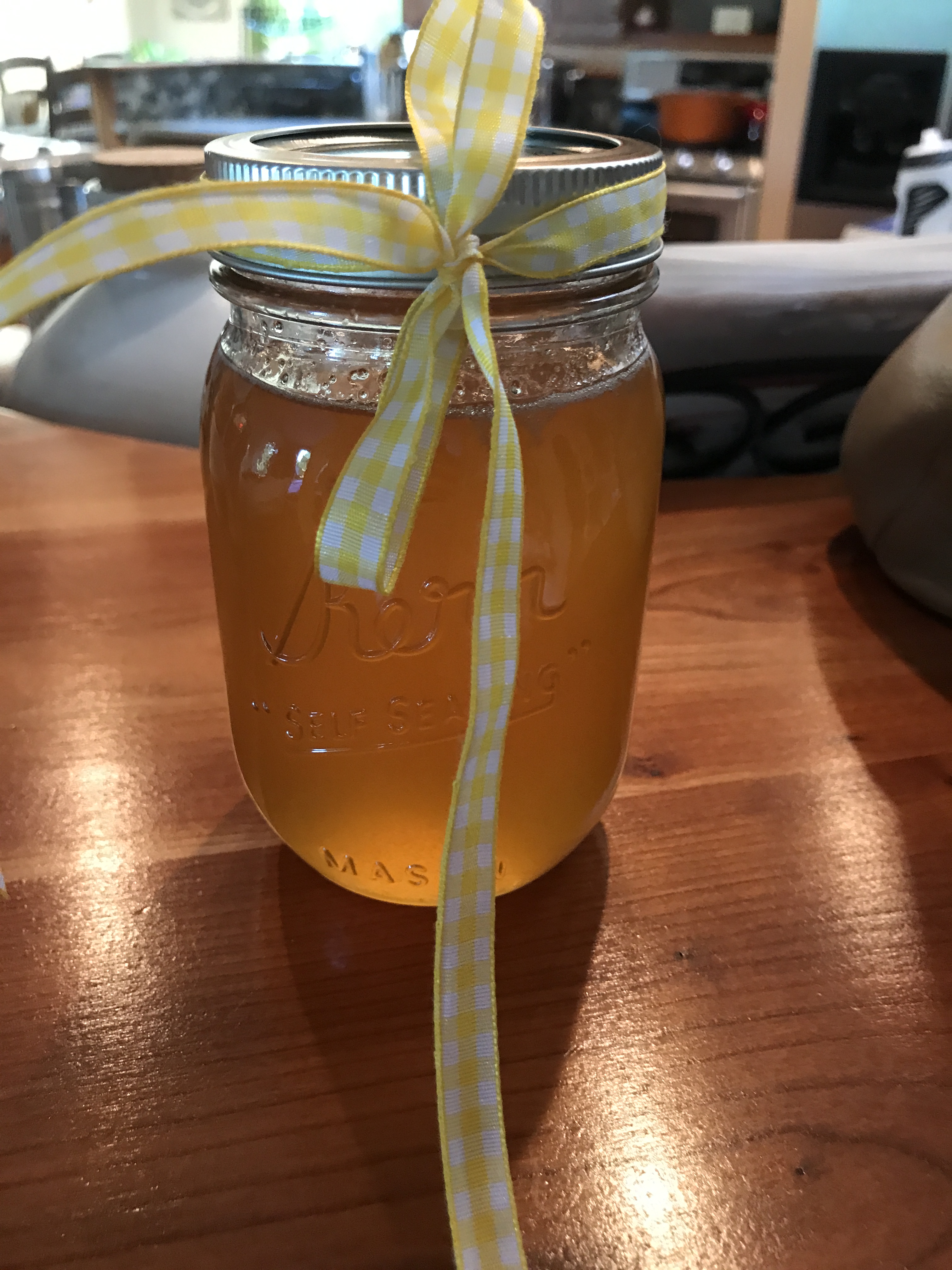 Give and get on social media!